Productivity Traits are genetic characteristics in plants or crops that are associated with improved crop yields and/or a plant’s ability to address productivity challenges such as diseases, pests, weeds, or weather.

The Productivity Trait Business is like the Crop Protection Chemical Business except the trait business uses genetics to protect the crop as opposed to chemicals.

The principal objective of seed company breeding programs is to develop productivity traits or genetic traits in seeds that make farmers more productive either by increasing yields or helping the farmers manage the many productivity challenges of farming such as weeds, pests, diseases, or environmental challenges such as wind, drought or heat. Precision gene editing changes the accuracy, speed and scale of breeding and offers the real possibility that agriculture will be able to address, in a time bound and predictable manner, the increasing challenges to crop farming due to climate change, and the new global regulations to reduce the use of chemicals in farming.

The development and production of productivity traits has traditionally been achieved through selective cross breeding or sexual reproduction of plants. Since Gregor Mendel, farmers and seed companies have used selective breeding methods to advance farming productivity. This is still essentially a random process that is based on natural genetic diversity and the breeder’s ability to identify (select) new traits with specific phenotypic characteristics that improve farming productivity. Despite natural limitations, selective breeding continues to be the core engine of innovation in agriculture. It is a central operation of all major seed companies for the development, production, and commercialization of new traits.

Precision gene editing holds the promise of a technological breakthrough in breeding: the ability to accurately in a timebound and predictable manner make genetic changes in a plant that are indistinguishable from conventional breeding or nature. Gene editing technologies promise to exponentially change the accuracy, speed and scale of breeding as well as the range of potential solutions. This is the same scale benefit that accrues to fundamental technological breakthroughs in industry such as analogue to digital or many advanced technologies whether they be transistors, electricity, automobiles, catalytic convertors, or digital photography.

In agriculture, gene editing changes the accuracy, speed and scale of breeding and offers the real possibility that agriculture will be able to address, in a time bound and predictable manner, the increasing challenges to crop farming due to climate change, and the new global regulations to reduce the use of chemicals in farming. In a 2022 AgBioInvestor study, the cost of discovery, development and authorization of a new GMO-based plant biotechnology-derived genetic trait commercialized in the period from 2017 to 2022 was $115.0 million. The mean duration to bring these genetic traits to the point of commercialization during the same period was 16.5 years. Selected breeding can be much longer. Without new technologies like gene editing, it will be impossible to address the global challenges facing agriculture in a reasonable timeframe.

The key economic attribute of Productivity Traits is that the farmer is always the winner. Farmers only pay trait fees for productivity traits that make them more productive and profitable. The remaining portion is divided between the seed company and the trait developer. These fees are paid on a per seed bag basis which can be translated into a per acre or per hectare basis. In other words, Productivity Trait fees are not decided by the consumer they are an embedded cost of farming that are paid for up-front as part of the seed cost.

The new technologies driving precision gene editing are increasingly the purview of Agricultural Technology companies like Cibus who have independently developed the core technologies and whose core business is the development and licensing its traits to seed companies. Together, third party trait developers share the non-farmer economics of traits with seed companies who sell the trait as a characteristic of their seed.

The Success of GMO Productivity Traits in Corn and Soybean

The GMO era was the coming of age for the Productivity Trait business. GMO technologies created several blockbuster Productivity Traits for Herbicide Tolerance and Pest Resistance. Examples of these blockbuster trait products are: Weed Control: Round-up Ready®; Liberty Link®; and Pest Control: using Bt or RNA interference. It is reported by the USDA that over 90% of corn and soybean crops in the United States had GMO-based traits by 2016 (Fig. 1). These traits have been adopted so widely because they are a main source of the growth and profitability of these crops seen since their introduction. 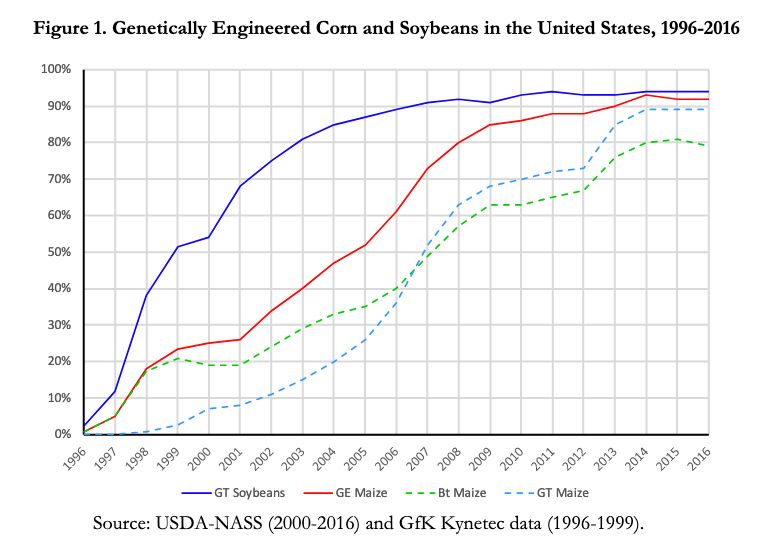 The actual license or trait fees (royalties) earned for herbicide tolerance traits associated with herbicides like Round-Up ®, Liberty® or Clearfield®-herbicide, could range from $5 to $20 per acre* depending on the crop and geographic areas. Trait fee pricing is based on the favorable economics provided by the specific trait in a specific crop in a specific environment. An example of the economics for the Bt traits would be higher yield that increases a farmer’s revenue or less cost associated with reduced pesticide (chemical) use and the fuel and manpower required for application.

In other words, these traits are very profitable for the farmer and are very important in the ongoing sustainability of farming. These productivity traits are grown on over 300 million acres globally. Because of the large number of acres involved, it is estimated that the annual trait fees paid for these limited GMO-based traits still exceeds $8 billion annually.

The Reaction and Restrictions on GMO Traits

There was a negative reaction to GMO technologies that occurred approximately 20 years ago that caused trait regulatory to be time consuming and expensive. Virtually all the major first-generation GMO crop protection traits were developed over 20 years ago: before the GMO regulations were widespread. Some geographic areas such as the European Union even banned the cultivation of these important trait products. The increased cost to meet the regulatory requirements in countries that permitted GMO-products and the limited Global markets, due to the areas that banned GMO-technologies, severely limited GMO-based development of new classes of GMO-traits or expansion beyond a few major crops.

The regulations against GMO-technologies and products were established in spite of the fact that these trait products had a massive impact on the productivity of farming and have the support and acceptance of the farming community. A main focus of R&D in agriculture for the last 20 years has been the development of new breeding technologies (NBTs) and new genomic technologies (NGTs) that do not use transgenes or recombinant genetic material that were the principal objections of the anti-GMO regulations. It is these technologies such as Cibus RTDS technologies that has caused the regulators to reassess the GMO regulations.

Recently, most major countries now have either voted to treat these NBTs or NGTs on the same basis as traditional breeding or have processes underway that appear positive to these precision gene editing technologies. As these regulations change to enable cultivation globally, the belief is that the gene editing revolution in agriculture will jump start trait development in all crops. Given a growing population, the continued decrease in arable land per population and the impacts of climate change, the emergence of precision gene editing and changes in regulations could not be timelier.

As a result of climate change, precision gene editing technologies have become more important. The top five crops: corn, soybean, wheat, rice and canola are cultivated on over a billion acres. Each crop has its own sustainability concerns that are expected to worsen with climate change and as the global population grows. These 5 crops account for over 90% of the world’s protein and 70% of the world’s edible oils. The productivity breakthroughs such as vertical farming do not help crops grown at this scale. The only scale solution to address productivity challenges in the 5 major crops is improved genetics.

It is for this reason that precision gene editing in agriculture is considered the dawning of a major new era of innovation and change. Globally, each country appears to be on a path to regulate these new breeding technologies on the same basis as traditional breeding. Eliminating the GMO-restrictions on the cultivation and import/export of gene edited products is a major step in making the new innovations: global innovations open to all global markets and all crops.

Because of the number of crops and the number of acres involved in the global agriculture industry, gene editing will become a major new global technology industry impacting billions of acres on a global basis that will materially change the amount of chemicals and fuel currently used in crop protection and materially change agriculture’s carbon footprint. Importantly, it will directly impact the sustainability of our food supply impacting billions of people globally.

In 2025, Cibus will start commercializing its first three gene edited traits: pod shatter reduction (PSR) in canola and winter oilseed rape and two herbicide tolerant traits in rice. Rice never had the benefit of the important GMO herbicide tolerance traits that benefited the corn and soybean industries so greatly. In the first six months of 2023, Cibus is expected to transfer to 5 customer elite germplasms for each customer with the PSR trait. It is expected that these traits will begin commercialization in North America in 2025. In addition, in the first six months of 2023, Cibus is also expected to transfer to a leading Rice seed company in its elite germplasms with both the weed management traits. It is expected that a Cibus rice trait will be launched in the US in 2025. Each of the three developed traits have been determined not to be regulated articles through the USDA’s “Am I Regulated” process, which was replaced with the SECURE Rule’s confirmation process. These are important milestones in in the growth of this industry and commercial milestones in the growth of Cibus.