See A Portion Of The Interview

Non-GMO gene editing will enable farmers to have a better workplace and a more sustainable future. Farming is at a major point of inflection. The challenges of climate change, the push back against crop protection chemicals and fertilizer combined with a growing global population is creating a near impossible challenge.

Cibus is happy to congratulate Dr. Sauer on her designation as a “Woman of Influence in Life Science” by the San Diego Business Journal. She is a true asset to Cibus and an inspiration to young women pursuing careers in science.

Women of Influence in Life Sciences 2021 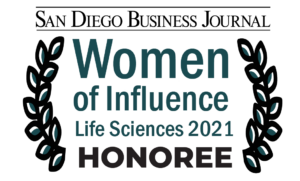 On behalf of the entire Cibus Team, I would like to congratulate Drs. Jennifer Doudna of University of California Berkeley and Emmanuel Charpentier of the Max Planck Institute for Infection Biology for being awarded the Nobel Prize in Chemistry for their groundbreaking work in CRISPR-Cas9. The application of these molecular scissors has brought success and innovation across several fields, whether it be the realm of research, the arena of agriculture or the world of medicine.

This award has broken multiple records. Since the first Nobel Prize was given in 1901, it would take roughly 15-25 years for a discovery to be recognized. However, with the potential of the CRISPR-Cas9 technology first documented in 2012 – a mere eight years ago – this represents one of the quickest progressions from discovery to award in history.

And rightfully so. What was originally a way for bacteria to defend themselves against invading viruses is now reinvigorating the entire field of gene editing, and the possibilities are endless. Scientists are developing medicines that can replace broken or missing genes, curing diseases entirely. Researchers can develop crops that have a resistance to mold, pests and drought, a feat that usually requires the application of fungicides and pesticides. By intervening at the genetic level in a precise manner, we can overcome some of humanity’s greatest barriers for the first time.

These scientists have not only revolutionized the world with their technology, but their accomplishments will no doubt help inspire a generation of young women aspiring to pursue a career in science, technology, engineering and math. They have joined an elite group of women that have been awarded the Nobel Prize, including Marie Curie, who was honored twice in Physics and once in Chemistry. Out of the 185 individuals who have won the Nobel Prize Chemistry Award prior to Drs. Doudna and Charpentier, there had been a mere five female recipients. Their hard work in the field of genetics has made the Committee acknowledge the achievements that women in science are accomplishing.

Congratulations once again to Drs. Doudna and Charpentier, and I look forward to where the gene editing field will advance in the coming years and decades – all based on their foundational accomplishments and contributions.

As the first product that Cibus has commercialized, we often receive the question, “Out of all the crops you might have chosen to develop your first novel trait, why start with canola?”

First of all, canola is a major global crop, grown on more than 80 million acres of land across the globe. Europe and North America alone account for 40 million acres.

Still, despite its importance, canola is a relatively new vegetable oil (at least when compared to its corn or soybean counterparts). Canola oil was originally known as rapeseed oil in Europe, and the earlier generations of it were developed for machines, not humans. Understandably people didn’t really want to eat oils on their salads that are of the “industrial” variety. As recently as 1980, you couldn’t have found canola oil on the grocery store shelf.

But then, in just a few decades, canola replaced corn and soybean as the main staple oil. How did it make this transition?

For one, canola oil has changed significantly since its industrial days. There’s a growing global demand for healthy sources of vegetable oil, and the modified version of canola oil is at the top of this list. It’s one of the most heavily consumed crops, and it can be found in many food products that make up our modern diet.

Farmers like it for its efficiency and yield, as the amount of oil per acre for the canola crop is higher than its competitors. It’s a true oilseed crop swiss replica rolex watches – as opposed to soybean and corn, which are grown mainly for feed markets in North America and China (oil itself is a byproduct). Canola is also a short season crop that can be grown in colder geographies, such as the Canadian prairies.

For plant breeders, canola has another hidden virtue. Canola is part of the Brassica genus: the family of plants that have diverged wildly over the years through breeding – broccoli, cabbage, Brussel sprouts and mustards all fall into this category. Because of this, using our technology to breed traits for one member of the Brassica family gives us a head-start with all the other plants in this family.

However, despite its recent prevalence on farms and grocery store shelves alike, canola is a crop that’s been starved of innovation. Many of the larger agricultural chemical companies have limited their investment in this crop. This created an opportunity for us at Cibus to tackle a neglected major crop to make canola heartier and more sustainable.

For hundreds of years, North America’s farmers have felt they could safely assume that next year’s weather would be much like last year’s and every other year’s, with adjustments for predictable cycles. That’s no longer the case. True, there have always been extreme weather events such as droughts and floods, but for the most part, they were rare. One of the hallmarks of the new millennium is that changes seem to be more severe and happening more frequently, even in what were assumed to be immutable natural cycles. This creates a huge problem for agriculture, which traditionally has taken many years (if not decades) to develop new crops or protective traits that might be bred into crops.

In the nick of time, a new biotechnology — precision gene editing — has emerged that can help farmers adapt to change as it happens.

The need for precision gene editing is undeniable. Climate, for instance, is changing at a faster pace today than at any time since human civilization began, and that confronts farmers with a welter of challenges. Hundred-year floods, droughts and heat waves have become common events; storms have become more violent; downpours more intense; and growing seasons have shifted. Farmers also must contend with the second-order impacts of these changes. One of the postulates of evolutionary biology is that in unstable environments, rapidly reproducing species (such as microbes, fungi and insects) have the advantage. For farmers, this means that whipsawing weather also forces them to deal with more frequent outbreaks of pests. One extreme example? The plagues of locusts — so big they can be tracked by satellite — now devouring crops in Africa, India and the Middle East.

For temperate farmers, a major threat comes from resurgent blights. With both traditional plant breeding or GMO technologies developed in the nineties, it takes upwards of 14 years to breed a plant resistant to a new blight — if it can be done at all. Faced with such waits combined with the need to ensure food safety and production, farmers turn to increased use of fungicides and other external treatments, with their additional expense and environmental concerns.

The order of magnitude acceleration that precision gene editing offers comes from structural advantages, as well as from increases in efficiency from optimizing and automating the processes involved — arising from years of experience working with these technologies.

The structural advantages are obvious. For instance, with GMO or transgenic technologies, the discovery phase — the phase during which a desired trait is identified — typically takes four to five years. That is because, with transgenics, biochemists have to develop and then test thousands of transgenic events before selecting a few synthetic gene insertions to advance and put into a crop, a process that takes an additional two years.

None of these steps are necessary with precision gene editing, since the technology works with the native genes within an existing crop. Instead, we sequence the genome of a crop — a process that takes 10–14 days. Nature has equipped plants with tools to repair errors introduced into the genome resulting from assaults a plant experiences each day (such as from the sun’s radiation). We use these innate tools to target desired edits. Once we have the gene sequence, it takes a few months to determine the precise edits to enable a desired trait, confirm their location within the genome, develop and validate the editing tools, including the oligonucleotide — the chemical construct that will stimulate the gene’s own repair mechanisms to make the desired edits. Customizing the “oligo” to specify the desired edits is the product of computation and bioinformatics, but not lab work. Like a computer chip, the oligo is made by a machine. But unlike a computer chip, the oligo is entirely dissolved and eliminated as soon as its job is done.

Similarly, because this specific application of precision gene editing works entirely within a genome, the technology has a structural advantage with regard to speed at the other end of the process. Because traits produced by precision gene editing are indistinguishable from those produced in nature, most of the world is treating these traits as equivalent to random mutagenesis and traditional breeding, as has been done for decades with an exemplary history for safe use. By contrast, crops with foreign DNA inserted undergo regulatory scrutiny that can take years.

Precision gene editing also has a structural advantage in the breeding of the trait itself. Many yield-enhancing traits require edits at several different places in the genome. Using our oligo, we can make these edits simultaneously. In the past, GMO technologies have struggled to make these changes in series, a process that can take many years, depending on the number of locations. Traditional plant breeding might take forever if several genetic changes are required (if possible, at all).

Decades of Mastering the Craft

Apart from structural advantages, twenty years of experience working with the various aspects of gene editing have allowed us to optimize and automate steps on the path from identifying a problem to producing a solution. Improvements in efficiency and lowered costs translate into improvements in speed. Cost savings improve speed because lowered costs allow us to repeat operations without worrying about incurring prohibitive expenses.

Here are some examples of the improvements coming from optimization and automation:

In the Discovery Phase:

In the Editing Phase:

The creation of trait platforms, essentially assembly lines for the editing process. Once a platform has been developed, it can be adapted to solve different problems.

“Cross-crop experience.” By solving problems for trait development for a given crop such as canola or rice, that expertise enables the development of traits in other crops.

Finally, increased speed drastically lowers the cost of new trait development, meaning that breeders can attempt to help farmers create more robust crops that might have been previously ignored by the big agricultural technologies prohibitive expense made for a low return on investment. There are many problems that can be addressed if the total cost is $10 million that would not be considered if breeders faced a budget of $130 million and 10–13 years of commitment. Similarly, there are many more companies that can spend $10 million to tackle an emerging threat to the food system than there are companies prepared to spend ten times that amount.

Precision gene editing promises to revolutionize plant breeding, opening the field to new players, enabling solutions for problems that have eluded plant breeders either because of expense, complexity or size of the crop and, most importantly, vastly speeding up plant breeders’ response to the new challenges of the new millennium.